If you SUBSCRIBE to me on YouTube you may be aware that I’ve been away on vacation in Disney World! I’m back in good old New Jersey now and i’ve brought back photos of all the best and geekiest things I found during my adventures in Disney World as well as Universal Studios. So without further ado, here’s part two!

What is it?!: The original helmet used in 1982’s Tron!
Where was it?!: I found this beauty in the Walt Disney museum, at the end of the tour in Hollywood Studios (formerly MGM studios) they have a great display at what Disney has done over all the decades. 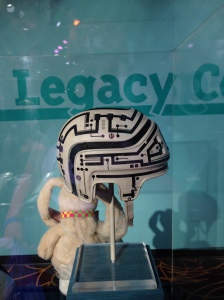 What is it?!: Life sized Wreck it Ralph!
Where was it?!: This mega cool statue (myself not included in your Disney photo, sorry folks!) is located inside the massive four story arcade called Disney Quest located in the West Side of Downtown Disney. The arcade is mostly filled with games for smaller children but, as a gamer I was impressed with the sheer size of the place and playable Wreck It Ralph arcade cabinets.

What is it?!: The Man of Steel!
Where was it?!: I found this life sized statue in the same huge comic book store I found the Dark Knight in! It’s even more impressive in person as you can feel the textures on the suit are that of a chain mail type material, these movie replicas were some of my favorite things I found on my trip. 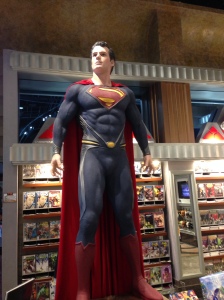 What is it?!: The actual make up and trench coat used in Hellboy!
Where was it?!: I found this among many other awesome monster movie makeup displays inside of a horror movie makeup show located at the front of Universal Studios. I highly recommend the show it’s hilarious as well as really interesting, I make sure I stop by and see it every time I’m in Florida.

What is it?!: the (REAL) Optimus Prime!
Where was it?!: My main man Optimus can be found out front of the Transformers ride in Universal and what’s so special about him aside from being awesome is that there is actually a human dawning the armor and standing on stilts posing along side my beautiful girlfriend and myself in the photo. Megatron also comes out to greet the fans in rotations but we were too late to catch a photo with him, I did see him though and he was just as impressive as Optimus!

Welcome! Allow me to tell you a little bit about myself. My name is Dean Marchese (a.k.a. thebeastnj on gaming platforms and the internet) I'm a gamer, lover of movies and comics alike. I'm here to share my thoughts and feelings with all of you beautiful people, on topics revolving around all forms of geek culture and whatever else may tickle my fancy. If you like what you read on my blog, please come and check out my YouTube channel by clicking
View all posts by thebeastnj →
This entry was posted in Uncategorized and tagged DC Universe, Disney pictures, Disney World, Hellboy, Hellboy makeup, Islands of Adventure, Man of Steel, Man of Steel suit, Megatron, Optimus Prime, Transformers, Transformers ride, Tron, Tron suit, Universal Studios, Wreck It Ralph. Bookmark the permalink.